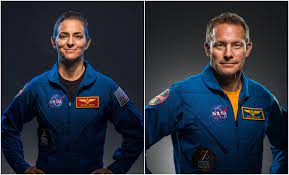 NASA has given Nicole Mann and Josh Cassada to be the astronauts of the Commercial Crew Program’s SpaceX Crew-5 mission to the International Space Station.

Mann and Cassada will be the spacecraft commander and pilot for the Crew-5 mission, respectively. More crew members will be added in the future.

Crew-5 is scheduled to launch on a Falcon 9 rocket from Launch Complex 39A at NASA’s Kennedy Space Center in Florida. The date is set by the end of 2022. The two will join a crew that has been in expedition in the launch station to stay for sometime to conduct researches for the benefit of humanity and exploration.

Mann and Cassada were put up for missions of Boeing Crew test for flight and Boeing Starliner. NASA decided it was necessary to change the astronauts to make the Boeing complete the making of Starliner. And also, having plans for astronauts to increase their spaceflight experience for proving the agency’s missions in future.

Astronauts from NASA like Butch Wilmore, Mike Fincke, and Suni Williams will provide training to Boeing as they prepare for the Boeing Crew Flight Test and Starliner-1 missions. In the future, more Boeing flight appointments will be made.

Mann is from California and is a Marine Corps colonel. She is a graduate from the United States Naval Academy with a Bachelor of Science in mechanical engineering and at Stanford University with a Master of Science in mechanical engineering with advanced fluid mechanics. She is an F/A-18 test pilot with over 2,500 flight hours in a many aircraft. Mann was chosen as an astronaut by NASA in 2013. This trip to space will be her first.

It has been a once-in-a-lifetime opportunity to train on a newly created spacecraft, the Boeing Starliner.

Cassada is a physicist and U.S. Navy test pilot who grew up in White Bear Lake, Minnesota. Before joining navy, he went to college in Michigan and then completed his Ph.D. research at Fermi National Accelerator Laboratory. Cassada has an experience over 4,000 flight hours in 45 various aircrafts. In 2013, NASA chose him as an astronaut. This trip to space will be his first.

Many astronauts have been living and working on the International Space Station for more than 20 years. Improving scientific knowledge and introducing new technologies and allowing for research that are not possible on Earth.

The station is a very important test place for NASA in order to better understand and overcome the challenges of long-duration spaceflight and to increase economic opportunities in low-Earth orbit. Economical companies aim to provide human space transportation services and develop a low-Earth orbit economy. Because of this, NASA can freely work on developing spacecraft and rockets for deep space missions to the Moon and Mars.